How are you doing?! Already getting packed for 2019 maybe – how can it be May next week?! It was like yesterday that I was thinking about my resolutions for the year!

I said I would keep it simple – so back in January I set only three. The first one was to ‘sleep more’, which I was following for a good few (read 2) weeks but now not so much. The second one was to ‘blog more’ – we can all see how that’s going…being end of April now and not a single new post! It might have something to do with the first resolution to be honest. But also the fact that I was busy with other projects, more or less eco-related.

One of eco-related engagements and one I am very happy about is the Zero Waste Festival which I help organise. There were three last year and the first one this year took place in February. Have a look at the Facebook page to see more! If you missed it and would like to see what all the fuss is about, fear not – we are already planning the next one for June…

The third resolution and the only one that I delivered on was to ‘read more’. I didn’t specify any more rules so it all counts – fiction books, factual literature, even magazines. So far for the 4 months the count is 6, which is probably more than for the whole of 2017!

As I said, these books included fiction as well but I would like to share two eco-related titles which I really liked, especially because they were a bit unexpected.

An excerpt from this book’s summary says:

The gargantuan effort needed to feed cities across the world on a daily basis has a massive and vastly underappreciated social and physical impact on both human populations and the planet. Yet few eaters are conscious of the processes that are required to bring food into a metropolis.

This original and revolutionary study examines the way in which modern food production has damaged the balance of human existence, and reveals a centuries-old dilemma that holds the key to a host of current problems, among them obesity, the inexorable rise of the supermarkets, and the destruction of the natural world.

I am not big into history but start talking about the history of food and I am all ears. What can I say, I love food! It was a hugely interesting book that covered all stages of food’s journey – both through the centuries and the physical process of getting food on our plates. It made me even more conscious about what I eat and how it got to my table and why it’s so important to pay attention to these things. (Have you ever thought about the healthiness of the produce planted next to motorways or sprayed by someone wearing a full bodysuit with a facemask on?) The author uncovers a lot of truth in the 7 chapters, each dedicated to one link of the food chain. It’s really food for thought and it made me want even more to grow my own food, however much I can.

The other book was one that got recommended to me by a librarian friend.

The World According to Anna by Jostein Gaarder 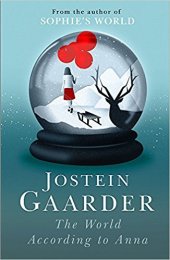 When fifteen-year-old Anna begins receiving messages from another time, her parents take her to the doctor. But he can find nothing wrong with Anna; in fact he believes there may be some truth to what she is seeing. Anna is haunted by visions of the desolate world of 2082. She sees her great-granddaughter, Nova, roaming through wasteland with a band of survivors, after animals and plants have died out. The more Anna sees, the more she realises she must act to prevent the future in her visions becoming real. But can she act quickly enough?

Yes, it is a book for a younger audience and yes, the critics might have said it’s a ‘climate change pamphlet for dummies’ but I like it. If you have a teenager at home who is asking questions about the world around them and you want to present them with an enticing book, I highly recommend this. I am probably biased because it talks about the effects of climate change and anything about this topic I regard as very important!

There are already several books on my list and I am dedicated to see this resolution through. (Well this post counts as the first stab at the blogging one…).

This Changes Everything: Capitalism vs. the Climate by Hilary Weston

Cradle to Cradle by Michael Braungart and William McDonough

The Tipping Point by Malcolm Gladwell

If any of you have any book suggestions, please do share!

I set off on a journey towards a simpler life with Zero Waste. You are welcome to join me! Zdenka

I am proud to be a member of the Zero Waste Bloggers Network!